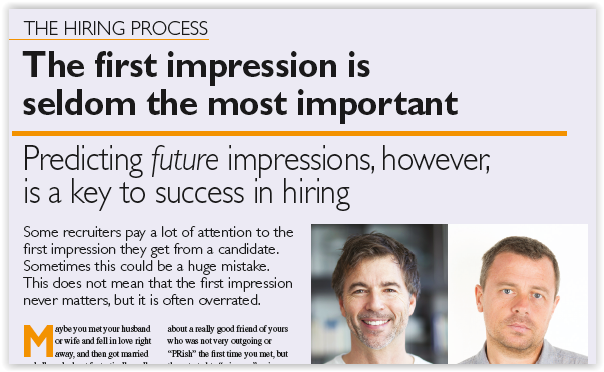 Predicting future impressions, however,
is a key to success in hiring

Maybe you met your husband or wife and fell in love right away, and then got married and all worked out fantastically well and you have lived happily ever since. Or you could possibly have met a person many times over time and, one day, you found yourself in love with a person you have known for a long time. Without having done any extensive research on the matter, I have concluded that marriages or relationships that are quickly formed based on a very good first impression seem to be short-lived, more often than not. The same in sales. You might have met a salesman who made a fantastic first impression but, as you encountered him over time, you became slightly less amazed the more times you met him. 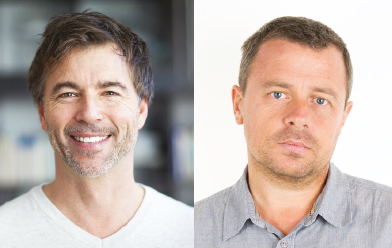 This does not mean that the first impression can never be vital. It really can be. In some jobs, you simply don’t get a second chance if you did not make a good enough impression in the first meeting. So yes, first impression can be extremely important in certain jobs and situations. But as a recruiter, you should generally be a lot more concerned with the 5th or even the 50th impression when you want to hire to build a real and productive team. When looking at this, think about a really good friend of yours who was not very outgoing or “PRish” the first time you met, but then started to “win over” or impress more and more, the more times you met. In hiring, you are often better off with this second scenario.

This leaves us with a simple idea: In hiring, the first impression is NOT super important unless the actual job requires that ability. Many companies miss out on hiring some amazing people simply because they pay too much attention to the first impression.

In hiring, a good first impression generally does not compensate for a bad 10th, unless it is a person who will almost exclusively deal with brand new people. In some other jobs, the first impression is crucial, such as in a busy reception, in some management positions, in a PR representative, in some sales jobs, etc. So in those jobs we have to consider what people will receive and think about from the first contact. But when it comes to people you will work with over time, and eventually meet hundreds of times, the first impression is rarely a good guide to what hiring decision you should take. That is why meeting a potential candidate several times gives you the chance to observe how the impression changes over time, and with more meetings.

Some quite productive people have problems presenting themselves in a “PR-way”. That is why they might not look so very interested when we ask them to “present themselves” or if we ask them to describe “who you are”.

Candidates who do not care about the first impression

< Why is production so important?
Журнал
The theory is great but how does it work in real life? >